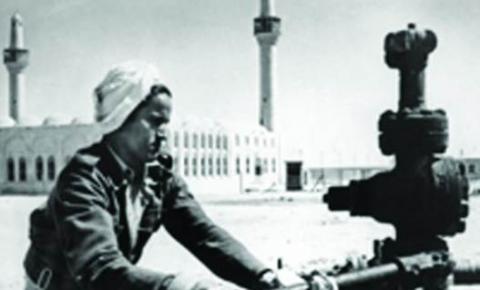 On April 30 1935, drilling started on test well No. 1 in Dammam. After seven months, only gas was found with traces of oil at a depth of 700 meters. So it had to be plugged. Drilling began on Dammam well No. 2 on Feb. 8, 1936, and started producing oil on June 1936 at a depth of 633 meters, with 3,840 barrels per day. This encouraged digging test wells 3, 4, 5 and 6 in Dammam.  In December 1936 geological engineer Max Steineke asked diggers to start digging the seventh deep test well in Dammam even after getting disappointing results in the other six wells.  After 10 months, at a depth of 1,097 meters, 5.7 liters of oil was found in a flow of mud with gush of gas. At the end of 1937, after drilling to a depth of 1,382 meters, no oil was found.  During the first week of March, 1938, at a depth of 1,440 meters, Dammam No. 7 started producing commercial quantities, reaching more than 3,810 barrels per day by the end of the month.
King Abdul Aziz signed a concession agreement for oil exploration with Standard Oil Company of California (SoCal) then, and as a result, geologists flocked to the city of Dammam to start exploration.  In October 1938, the Kingdom officially announced the discovery of oil in commercial quantities from Dammam No. 7. Hence, a pipeline along the 69 km from the oilfield in Dammam was established to the Port of Ras Tanura in 1939.  The first shipment of crude oil was exported on the first of May 1939 in the presence of King Abdul Aziz.  Dammam No. 7 stands on a hill named Jabal Dhahran and continued producing oil until 1982 when, because of operational reasons, it was taken out of production after 45 years of continuous production. Neither could the first Saudi and American drillers have imagined, even after they struck oil, that Dammam No. 7 would be capable of producing not for months or years, but for several decades, or that this one well would pour out more than 32 million barrels of oil with a daily average of 1,600 barrels.  Saudi Aramco company now has more than 50,000 employees, about 550 wells in production, 20,500 km of flow lines and pipelines and more than 60 gas-oil separator plants.