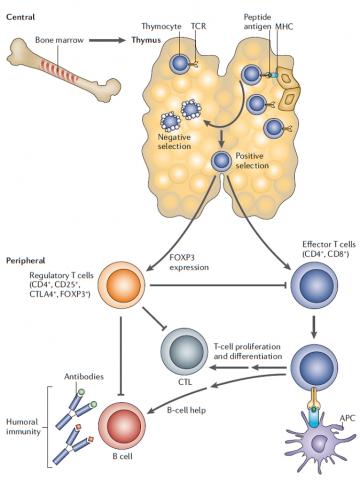 What Is Tolerance in Immunology?
Immune tolerance, also referred to as immunological tolerance or immunotolerance, is an active state of unresponsiveness to specific antigens in an effort to prevent destructive over-reactivity of the immune system. It prevents an immune response to antigens produced by the body itself or recognized from a prior encounter.

There are two types of immune tolerance: self-tolerance and induced tolerance.

Self-Tolerance
Self-tolerance refers to the ability of the immune system to recognize—and therefore not respond against—self-produced antigens. If the immune system loses this ability, the body can start to attack its own cells, which may cause an autoimmune disease.

Both recessive and dominant mechanisms can play a part in self-tolerance: autoreactive lymphocytes are eliminated during development (recessive) or actively kept in check by regulatory T cells (Tregs) during circulation (dominant).

Induced Tolerance
Induced tolerance occurs when the immune system actively avoids responding to an external antigen. This tolerance is induced by previous encounters with that antigen.

An example of induced tolerance is a deliberate manipulation of the immune system to avoid the rejection of transplanted organs or to provide protection from allergic reactions.

Central Tolerance vs. Peripheral Tolerance: What’s the Difference?
Immune tolerance mechanisms are separated into two categories: central tolerance and peripheral tolerance. These mechanisms occur at different stages of the lymphocyte lifecycle, and a deficiency in either category can result in serious consequences to the body.

* Central Tolerance
Central tolerance mechanisms occur during lymphocyte development, either in the thymus for T cells or in the bone marrow for B cells. Through this process, immune cells with T cell receptors (TCRs) or B cell receptors (BCRs) that can recognize and bind to self-antigens are eliminated or, for some T cells, are differentiated into Tregs. By preventing the maturation of autoreactive lymphocytes, central tolerance helps the immune system discriminate between self-antigens and foreign materials.

Elimination of self-reactive lymphocytes can occur by one of several immune tolerance mechanisms:

One mechanism of peripheral tolerance is via Tregs, which can induce suppression or anergy of escaped cells with self-antigen receptors.

This process prevents the immune system from overreacting to self-antigens or non-harmful materials.
* Fetomaternal tolerance is the prevention of a maternal immune response against a developing fetus. Major histocompatibility complex (MHC) proteins help the immune system distinguish between host and foreign cells. MHC also is called human leukocyte antigen (HLA). By expressing paternal MHC or HLA proteins and paternal antigens, a fetus can potentially trigger the mother's immune system. However, there are several barriers that may prevent this from occurring: The placenta reduces the exposure of the fetus to maternal immune cells, the proteins expressed on the outer layer of the placenta may limit immune recognition, and regulatory cells and suppressive signals may play a role.
Source: Akadeum Life Sciences